If you have a document that you wish to upload to your computer, you may be disappointed at the quality of an image if you take it with a camera on your phone or a regular camera. To upload a high-quality image of a document, you need a specialized piece of technology.

A scanner in computers, which is a device that captures the image of various documents and papers, is a better tool than a regular camera. It creates a crisper, clearer image with higher resolution to upload or print. To learn more about scanners, read the article below.

What is a scanner?

A scanner is a device that captures the image of a document and converts it into a digital file. Because of the digitalizing process, scanners are also frequently called “digitizers.” After a document is placed on a digitizer bed, a “scanner head” will use light or electrical charges to create a digital copy of an image. Some scanners move the document that is in the process of being scanned, while others move a beam of light to capture the image.

Regardless of how a scanner specifically works, it will upload a file of the image onto a computer or other device once it is done. Some scanners combine scanning technology with printing capabilities. These scanners are able to upload a file onto a device and print it. Others are only scanners and therefore will not be able to print a copy of an image after it is scanned.

What are the features of a scanner?

Some scanners may also feature software that allows you to resize images or reduce file sizes. While different scanners may have different features, they all essentially have an identical function of creating copies of images to store on another device.

What are common brands for this device?

Epson, Hewlett Packard, Canon, Fujitsu, and Plustek are all popular scanner brands. There may be less well-known brands for scanners that function suitably. However, if you want a scanner that is reliable and produces high-quality images, choosing from a reputable brand will ensure that you get your money’s worth in your technology purchase. 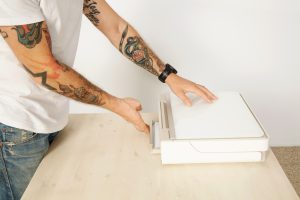 How do I use a scanner?

Depending on the style and features of a scanner, you may use it in different ways. For most scanners, the process of scanning is a simple one. All you usually have to do is place a document face down on the scanner bed so that it is facing the light. Then, you close the lid of the scanner to keep the document flat and outside sources unseen in the final image. Finally, you press a button on the scanner or on some kind of software to start the scanning process.

Once scanning is done, you can upload the file to your device or some sort of cloud. After you review the final image, you can see if you like it. If you do not like how the scanned image turned out, you can always reposition the document and try again. If you do like it, you can usually save the image and rename it if necessary.

While a scanner is usually used to scan two dimensional objects, it is possible in certain cases to scan three dimensional objects. If the objects are small enough to fit on the bed of the scanner, you will be able to cover them with a large dark cloth and scan them. Keep in mind that doing this may result in an odd-looking image.

When images are scanned, they are essentially photographed from a specific angle. They may end up distorted or have unsightly shadows as an end result of a photo. They might also get squashed in the scanning process. Still, you can technically scan three dimensional objects with a computer scanner. You just might not like the outcome of this process.

Can a scanner be used for photography?

When using a scanner, it is important to keep light from escaping from the scanner. It is important to maintain the quality of the resulting image and to keep your eyes safe from the bright light. Once you arrange items or images on a scanner, you can simply cover them with a large dark cloth and scan normally. If the items are flat enough to close the lid fully over them, you can just do that and scan as you usually would.

If you are using a scanner to photograph artwork, you will want to play around with the brightness and other settings. While a scanner’s high level of brightness and contrast may be perfect for creating crisp, legible copies of documents, it is not ideal for scanning colorful or subtle artwork. If you scan a piece of artwork without playing with the settings first, you may end up with a washed out or otherwise unpleasant looking picture.

To photograph paintings, a scanner is not usually your best choice. This is because paintings tend to be too large or too heavy for the scanner bed to be properly utilized in scanning. Still, flat paintings such as watercolor paintings on paper or mixed media art on paper may be appropriate to scan. Pay attention to any three dimensional elements in the item you are photographing because these may produce unwanted shadows or other unwanted effects.

What are the differences between scanners and copiers?

While the function of scanners and copiers is essentially the same, the outcome of a scanner and copier will vary greatly. A copier tends to create copies of an image or document. The copies are then printed directly from the copier onto blank sheets of paper. A scanner, on the other hand, is designed to store the image scanned on a computer, USB drive, or other device. You can print the copy after scanning it, but you will have to do so using the computer or tablet onto which you scanned the image.

Copiers are designed to print copies of items directly after copying them. Some copiers may be able to take copied items and save them on a USB drive or send them to an email address or device. Still, as a general rule, copiers tend to be used with the intention of printing a copy of a document, hence the name. On the other hand, scanners are almost strictly used to create a digitized copy of a document to store for later on another device.

What is the history of the computer scanner?

While a fax machine is not technically the exact same thing as a scanner, it is the device from which scanners are derived. As a result, we can trace the history of the scanner back to the dawn of the fax machine. An inventor named Rudolf Hell sparked the idea of a fax machine in the mid-20th century. Scanners as we know them today were officially invented in the 1990s. However, as the creation of the fax machine indicates, people have wanted and needed a device that could copy documents and store them in other places for many decades prior to digitizers.

The kinds of scanners that require users to feed a sheet of paper into the device have been around since the mid-1980s. These scanners have a more simplistic design and so they were easier to conceive as an invention to push onto the market than flatbed scanners. However, less than a decade later, inventors were able to create the flatbed scanners we know, love, and still use today.

While scanners have been around for quite a while, they still continue to be a popular device today. After all, computers are not able to scan documents themselves, despite the many advancements we have made with computers. Until computers are able to do that, we will need scanners to get the job done for us. One day, we may have hybrid scanners and computer combos that make scanners unnecessary. Until that day, scanners will be a useful tool to purchase and use.

Where can I buy a computer scanner?

While there are plenty of places where you could technically buy a computer scanner, you will want to get a scanner from a reputable source. Most big box stores such as Walmart and Target should carry scanners. Additionally, popular online retailers such as Amazon carry scanners, as well.

Still, if you want to get some guidance about your purchase of a scanner that is qualified and useful, buying a scanner from a technology retailer such as Best Buy or Staples may be your best bet.

Chosen by the editor